Writing this blog is SO hard. Stuff is relentless, and I’m expected to somehow remember it all, and worse still, to communicate it in a digestible form.

It is ridiculous to hope to describe all the beauteous and alarming experiences we keep having, almost as silly as attempting to effectively convey even a tiny selection of the funny, lovely, sad, strong, wise, wonderful, dangerous, gorgeous people we have met.

Well you can call me Little Johnny Ridiculous, because here goes.

Nashville is ‘Music City’. It is the home of country music, as Memphis on the other side of Tennessee identifies itself as the home of the blues.

We saw some decent blues in Memphis, but the place definitely has a kind of theme-park museum feel to it. People aren’t making NEW music there, they are running through old stuff for the benefit of nostalgics like me and Mon.

Nashville is more than just phantoms though. It is full of musicians making every kind of music, as well as those businesses big and small who distribute and capitalize upon on their produce. Nashville has STILL GOT IT people.

We have been staying in a house full of young musicians, artists, poets, and such. There are 10 people living here, I think, but the number of people staying at any one time fluctuates wildly. Most nights four or so people sleep in every room. 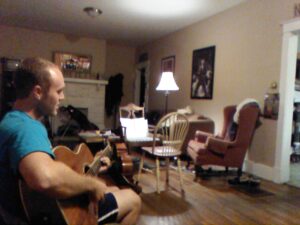 There are band practices in the living room, empty bottles lining the shelves, cigars being smoked on the rickety porch, bonfires in the garden, old posters on the walls, poems pinned to door frames.

A freakish wooden head looks askance, an ashtray bulges happily, a guitar hums from the next room. The kitchen is full of chatting and hugs. 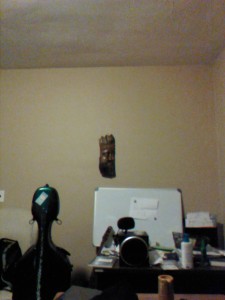 As I write Mon is getting a classical guitar lesson from Max.

Last night we drunk whiskey, smoked cigars, and had a BIBLE STUDY.

Many of the people here study music at Belmont, which is a Christian College. I could devote an entire blog to the history of the place. Strictly speaking this isn’t true: but I like to say it was founded by a bear.

Part of studying music here is going to gigs. You HAVE to go to a certain amount per semester. Luckily there are thousands of shows going on in Nashville, in the street, in bars, clubs, bookshops, churches, and ice cream parlours.

In America, when you are at Uni, your not allowed to just study your chosen subject, you have to do other stuff. One of the strange things about Belmont are some of the required classes. For instance Max has to do a course on the threat of nuclear terrorism. Handy stuff for a classical guitarist.

Also at Belmont, not only are you not allowed to drink or smoke anywhere on campus but you are not allowed to have posters or books that reference those activities. If you do, the college has the power to put you into REHAB.

Luckily for the rehab services this house is not on campus.

I can’t talk about everyone who lives here, let alone the glorious string of winners who drop by every day.

Somewhat arbitrarily then, I will choose just one resident. Jerry is an old guy who lives in the basement here. He is real southern. When we got here and told him where we are from he said “You mean England, Kentucky?”

Most of the day he sits on the porch listening to the radio. “When you’re young you can run around” he literally just said to me “But when your old you take it slow.” I haven’t had much sleep and I said that being old sounded nice. “It’s pretty good” he grinned, shuffling off to make coffee.

Jerry has had a LIFE. He was in Nam. He got conscripted when he was 18. He said he was pissed (which means upset, rather than drunk), but seeing as his father and grandfather and great grandfather all fought in wars he wasn’t surprised.

He said that within a week of being in Vietnam he had killed a man, lost his virginity to a prostitute, and drunk his first beer.

On coming back to America he found his wife had shacked up with a sheriff and required a divorce. He had been sending money home to put her through college. I asked him what she studied. “Screwing” he laughed. But he is not bitter. He admitted that if it were women who went to war and men who stayed home he may well have done the same thing.

He moved to Nashville and spent many years listening to country music in bars and clubs and working in a hardware store.

He did two long stints in jail.

Then he was on the streets for many years.

Kevin and the boys in this house sometimes invite homeless people in for food.

Jerry never really accepted help from anyone and didn’t beg. He would just sit there listening to country radio on his headphones. But then he had had a heart attack out there and the house invited him to stay and live here permanently. He is a fine man, brimming with good humour.

As well as sitting on the porch and discussing existentialism, we have been driving around with erstwhile diva Berry Galazka, smoking cigars, and drinking wine.

Berry makes pop music. She is touring Europe next year, so look out for her.

When I first got in her car she put on some music, turned it up loud, looked at me and said “Prepare to be IMPRESSED.”

She sung along to every tune, from r&b to dubstep to rock to pop. She rapped along to the rap songs too; offering a stream of translation for my benefit as she rattled along. I learnt much. In England HAM implies a very thin slice of pig, but in rap music HAM means ‘Hard as a Motherfucker.’

I’ve still not quite worked out how to convincingly work it into a sentence, but gosh do I enjoy trying!

In the garden here, which is strewn with cans and rocked by the thrum of the freeway on the other side of an immense concrete wall, there is a massive bit of graffiti. It reads “Continue loving each other as brothers and sisters. Hebrews 13:1”

We call this house The Good Ship.

1 thought on “The good ship Nashville”