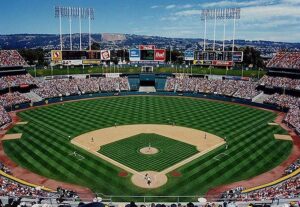 Oakland is a city right next to San Francisco.

I have only been there twice so I know it may be premature to say this, but I think it might be THE BEST PLACE.

Time One was when me and Mon went to baseball game where we watched the Oakland Athletics (the A’s) beat the Seattle Mariners. Baseball is a sport I am rapidly learning to love. You don’t get any violence or agro at a baseball game. There is loads of singing and plenty of snack breaks. People LAUGH there.

The A’s and their fans are a riot. The most popular players have their own dance routines, and the whole crowd does them when they step up to the plate. There is a big screen and it films the people who are doing the dance in the most hilarious way.

Everyone goes, from young children to retired couples.

I felt weird, but still moved, when they sang “O Say can you see…”; everyone standing with their hands on their hearts.

But the ‘9th Inning Stretch’ where everyone dances and sings “Take me out to the ball game” almost made me cry.

Basically what happens is lots of people go to a concrete Colosseum in an industrial district and have a really good time. It is a ritual of unspeakable brilliance.

Oakland is a poorer place than SF and the team struggles financially. The tickets are cheap and they give you a free hotdog.

Time Two was a street party. They have one once a month in the town centre.

We arrived late, but were there long enough to recognise a truly majestic street party.

The first thing we saw was this chubby black kid playing drums, with a nerdy white guy sporting a scruffy beard playing base. Both of them were talking to people while they were playing, and they were both strikingly brilliant at doing what they were doing.

A crowd formed. People stood and nodded and tapped their feet. The music was generating an inescapable atmosphere of relaxed ecstasy. Everyone listening was absolutely brilliant. We shone like bulbs in a microwave.

If they had kept playing, all the worlds problems would have been solved, one by one, just like that.

Next we saw some kids on push bikes and one of the bikes had a massive speaker wedged in it and it was blaring out music. The sound quality was abysmal, but they were having SUCH a good time. It is difficult for me to convey what a good time they were having.

What they were doing was sexy, rhythmic, empowering, and also hilarious. Everyone was on bmx’s and push bikes and they were putting their wheels in the air and spinning them and grinding and laughing and laughing.

What on earth have we been doing, if not this?

And we saw dancing cars! They bounced around, shaking their chassis’ in joy.

Also, and you are not going to believe this, NEW ORDER played. I
couldn’t believe it.

It isn’t the kind of music they like there but they are a great band so everyone had a whale of a time.

I asked one guy if it was THE New Order so many times that he almost had to attack me.

There was a Time Three also, but I don’t have time to write about it now. I just wish to thank everyone involved, gratuitously.